The 19th-century American poet and author Celia Thaxter spent her childhood, as the daughter of a lighthouse keeper, bathed in the “radiant light of hope” that beamed down from New England’s Tallest Lighthouse at Boon Island. Her portrayal of lighthouse living captured the many ups and downs of this particularly unique and sometimes exciting form of coastal living. For centuries writers have heaped the Maine coastline with literary superlatives; some are even true.

No places in the Maine Beaches are more mysterious, intriguing, and deserving of having a light turned on them than these five Maine Beaches lighthouses.

Scroll over the lighthouse icons to read more.

Click here to read about Maine’s most photographed lighthouse.

Click here to read about the longest manned lighthouse.

Click here to read about a gruesome shipwreck and how this light got its name.

Click here for a recipe inspired by this good old-fashioned lighthouse. 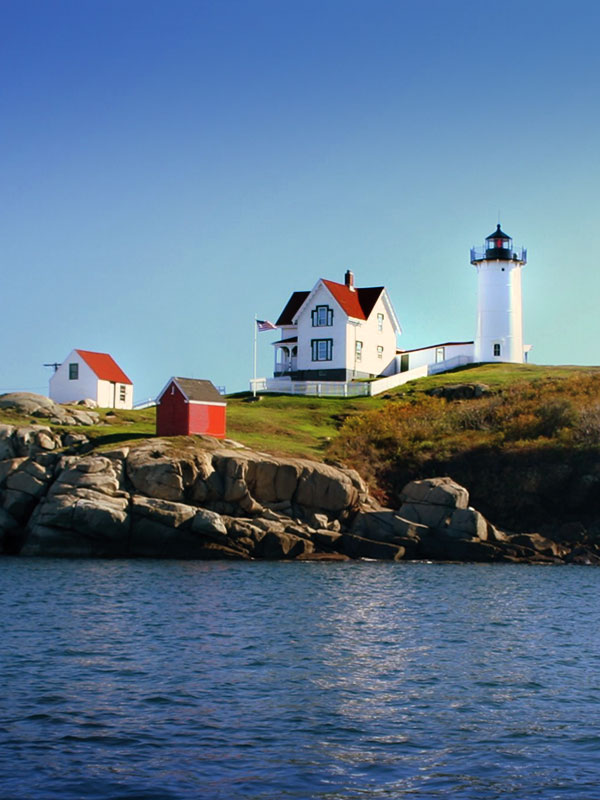 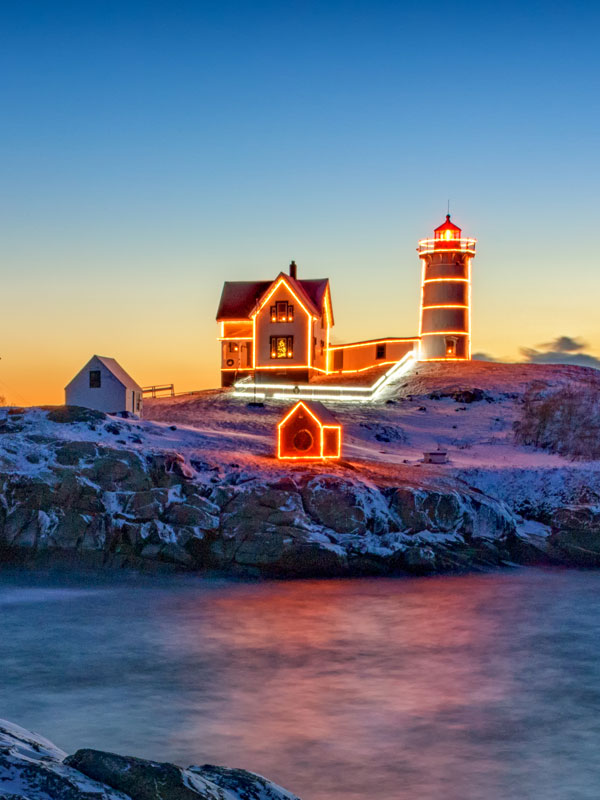 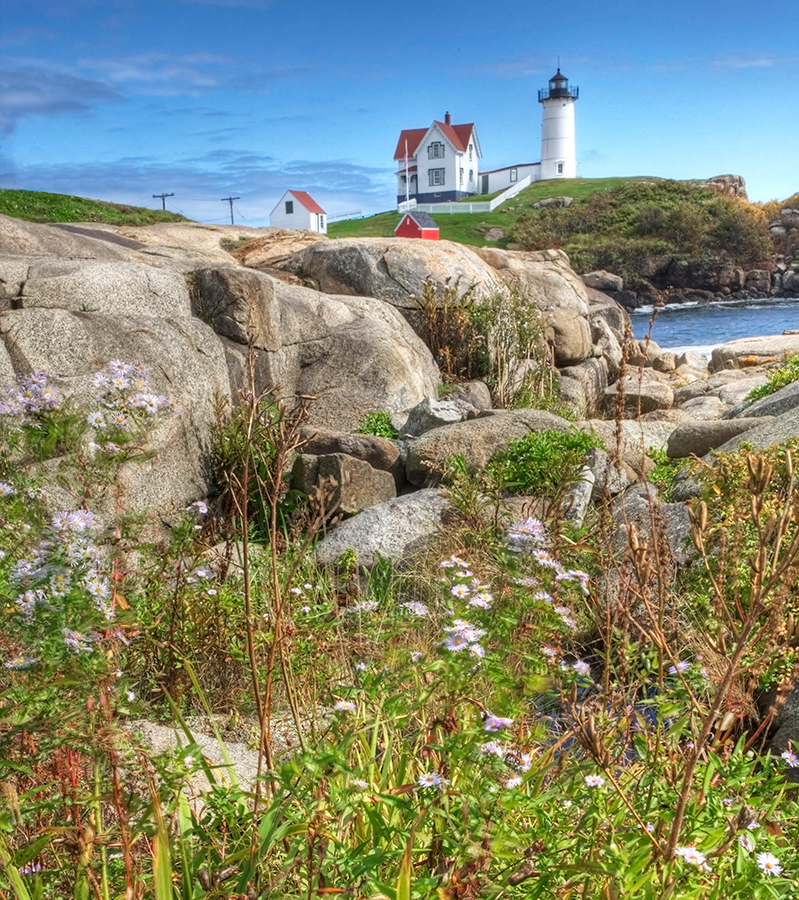 The First (and Only) Lighthouse in Space

In 1977 NASA launched the Voyager 1 satellite on an interstellar journey. Forty-five years and 12 billion (with a B) miles later, they continue to move through our galaxy. In and among the flashing lights and transistors, maybe even right next to the eight-track deck, is the Voyager Golden Record. Assembled as a concise record of scientific and cultural life on earth, the Golden Record includes more than a dozen audio tracks and over 100 images, including one featuring The Nubble, called “Seashore,” taken by photographer Dick Smith; top that, Jeff Bezos.

The highly-photogenic Nubble’s location, its picture-perfect white-clapboard quarters, and red outbuildings perched high up on a rocky outcropping of rock make it an ideal subject for the perfect vacation photo or Plein air painting subject. And while it could be hard to truly substantiate the claim that the Nubble is Maine’s most photographed lighthouse, its long history of attracting visitors from around the world goes a long way to support the claim. That and the 97,415 Instagram photos in our most recent unofficial count of all the hashtags.

Built in 1833 (then rebuilt in 1859) to protect boaters from a shoal of rocky islets and reefs at the head of Cape Porpoise Harbor, Goat Island Light remained an officially manned light until 1990 making it the last manned light in Maine. The light welcomed new owners and keepers in 1993. After the monumental efforts of the Kennebunk Conservation Trust, the light, the keepers’ quarters, and the remaining outbuildings were restored in a style of a 1950’s New England home and thankfully re-manned. It remains that way today under the care of Scott & Karen Dombrowski. Read more about their story.

In May of 2002, during a routine sunset paddle Dick Curtis, one of the keepers of the Goat Island Light, lost his life in the waters surrounding Goat Island when a rogue wave overturned his boat. Several months later, while guiding a tour of the island, Keeper Scott Dombrowski heard a young woman whispering to her companion, “this place is haunted.” Scott stopped the tour and spoke plainly to the woman, “I hope it’s my best friend; you know he passed away out here back in May.”

Continuing the tour, the woman approached Scott as they began to ascend the stairs to the lighthouse. Apologetically, she said, “I’m really sorry, you know, I don’t usually tell people stuff like this, but… well, there is a guy sitting here, on this window sill, he says his name is Dick, and he wants to let you know that “Everything is OK, he’s fine.” Scott was floored. After the tour, the woman approached Scott and shared with him that Dick “told” her that he would make his presence known electronically when he was present. Scott responded, “well good, because I’m numb as they come when it comes to things like sensing spirits.”

Not knowing whether to believe the woman, he opened himself up to the possibilities. And in time, he came to appreciate the idea that Goat Island might even be a spiritual portal. After conducting an investigation, the makers of the New England Ghost Project shared with Scott that they had encountered the spirit of a teenage boy who shared with them that had drowned after falling from a passing schooner in 1790. Since then, Dick lets his best friend know he is around by blasting the powerful automatic foghorn, even on days when there isn’t a cloud in the sky. Even after the foghorn was replaced by the Coast Guard or when its power supply was disconnected. 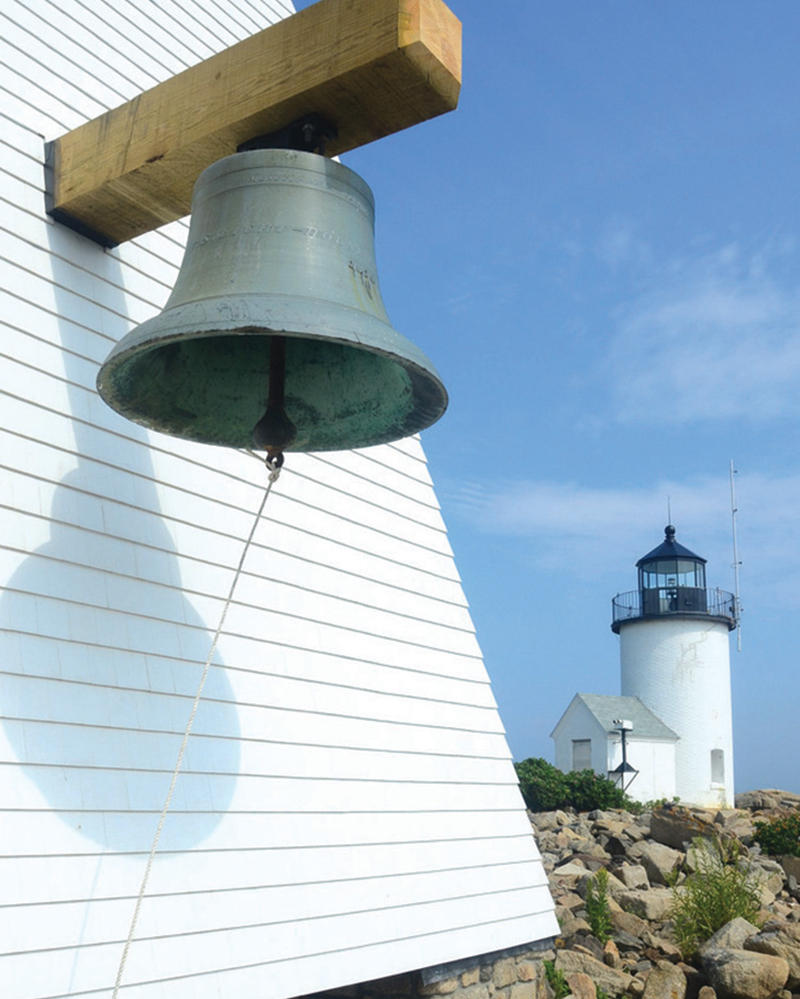 When asked if the spirits on the island ever bother him, Keeper Dombrowski replied, "no, no, no, they're…respectful. They're good; they make this place feel good."

At 133-feet, about the same height as a 10-story building, this granite giant holds court as Maine’s tallest lighthouse and along the entire New England Coastline. And while its height makes it visible at a distance from many spots along Maine’s southern coast. Some great vantage points include Sohier Park in York (also home to the Cape Neddick Light), from the top of Mt. Agamenticus, and points along the shore, including Long Sands Beach. But the best way to view it is by boat. Boon Island Light also has a near twin in its design in the 122-foot-tall Petit Manan Light found near Milbridge several hours north along the coast.

At nearly six miles from shore, this tiny grey bit of desolate granite comes with a name steeped in irony. While the word “boon” has fallen out of common use, being replaced by more vivid words like a blessing, bonus, or even windfall, there seems no less appropriate place than Boon Island to carry such a name. The island is the setting for a harrowing and very true tale.

About a century before its impressive granite lighthouse was erected, the small granite shoal hosted one of the most chilling dinner parties on the maritime record. In early December of 1710, the Nottingham Galley, an English merchant vessel, plowed into the granite ledges at the island’s eastern edge under the surging crush brought on by a hurricane. The wreck perilously stranded the crew of 14 on the isolated rock.

Rescue eluded the seemingly doomed castaways. Within days two of the crew members had perished, and another drowned in a failed attempt to pilot a raft the six miles to shore. Weeks passed, and the winter weather became more fearsome. With no help in sight, the remaining ten crew members without fire or food resorted to the appalling task of consuming one of their own. It was not until December 26 that a second makeshift craft built by the crew made its way to York Harbor. Within days the remaining members of the crew were rescued.

After this unforgettable incident, leaders in York, in coordination with local fishermen, initiated the practice of outfitting the island with a barrel of non-perishable food, doubtless a “boon” to any sailor stranded by sea or storm. In time the island, as is common practice, became known thereafter as Boon Island. 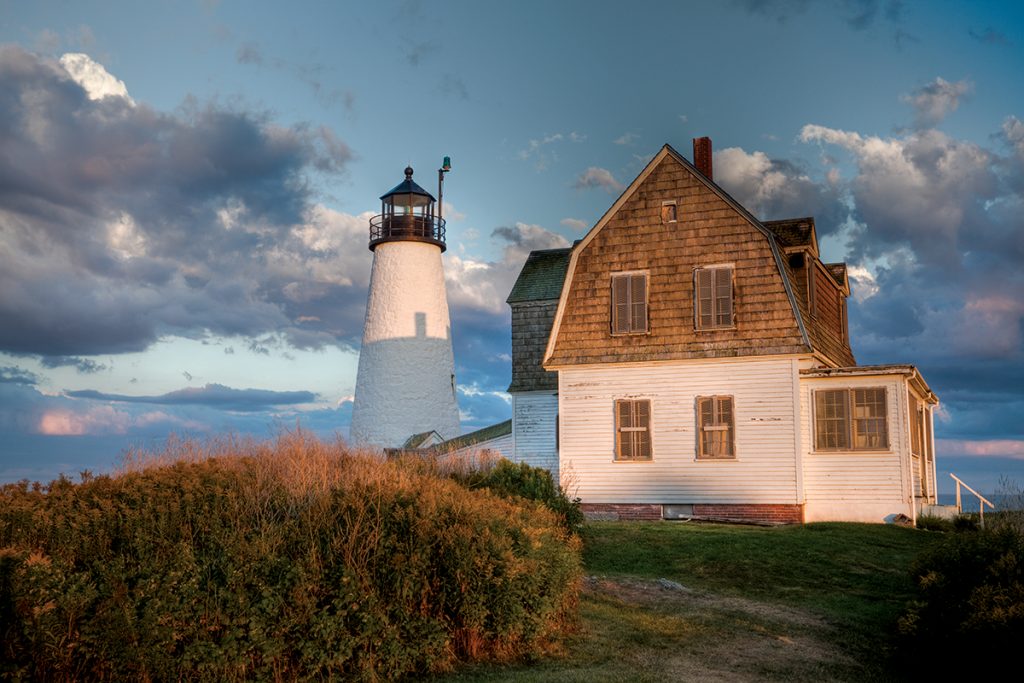 When Keeper Thomas Henry Orcutt brought a two-month-old Scotch Collie mix puppy named Sailor home in 1896 to Wood Island Light, he had no idea that the dog would eventually become known worldwide. Perched on the southern edge of Saco Bay near Biddeford Pool, Wood Island Light sees a fair amount of traffic from passing ships.

Then as the story goes, in December of 1897, when Orcutt failed to respond to a passing boaters bell, the dog sensing something wrong, first howled, then howled again, and then took hold of the rope and rang the bell in response.

To the delight of his family and soon all who passed by, the diligent Sailor eventually assumed the bell ringing responsibilities. It didn’t take time for the story to spread, with Sailor becoming a nationally recognized phenomenon and, by some accounts, a tourist attraction. Sailor rang the bell for every passing ship for nearly a decade until his passing in 1906: Atta-boy Sailor, ding-ding, ding-ding.

Celebrated statewide every year on the second Saturday of September, Maine Open Lighthouse Day offers visitors the opportunity to explore and learn about the vital role that lighthouses have played throughout our maritime history. Two of The Maine Beaches’ lighthouses that open up each year are Goat Island Lighthouse at the entrance to Cape Porpoise Harbor and Wood Island Lighthouse, which sits in Saco Bay.

How best to view our lighthouses 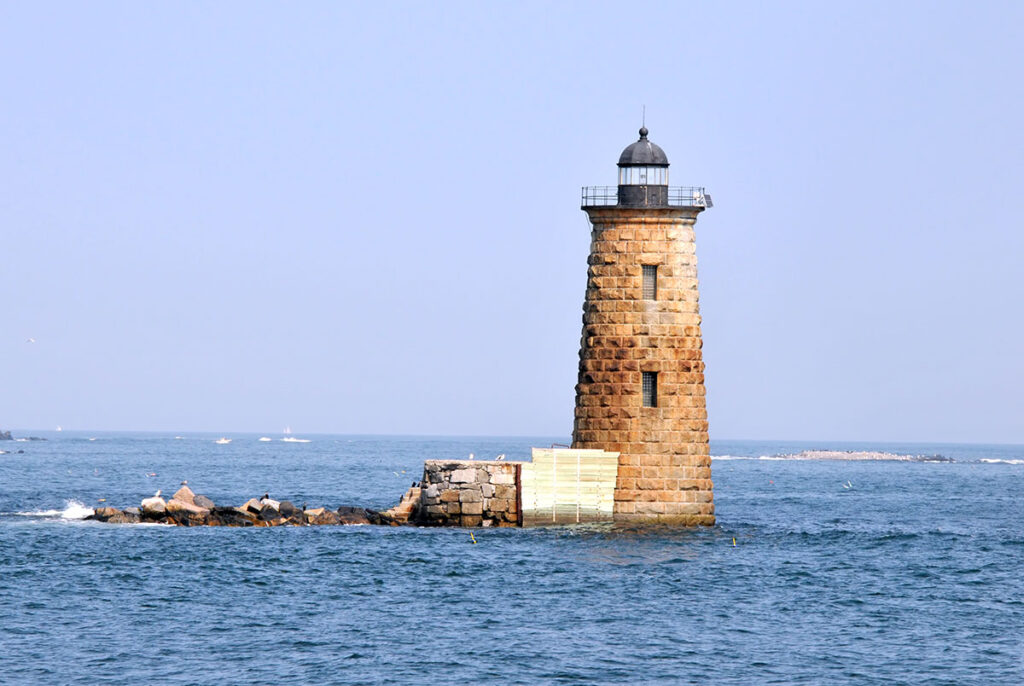 While all lighthouses cast a light back on engineering masterpieces of another time, there are a few lighthouses that you look at and wonder, “How in the world did they do that?” Whaleback Ledge Light (also named Whaleback Light by some) sits between Portsmouth, NH, and Kittery, Maine, at the mouth of the Piscataqua River. An 1872 structure (the second on the site) built from hewn and dovetailed hunks of granite, the lighthouse is quite serviceable though in need of some restoration. Alongside it is a second tower of cast iron that serves as a fog signal house.

Whaleback is remarkable because the ledge is fully submerged at high tide. According to the American Lighthouse Federation, “the water around Whaleback Light is seemingly always agitated, if not downright nasty. The confluence of the river with the open sea – and the fast currents that rip through this area, make Whaleback a very tough place to approach.” By all accounts, the wind never ceases, further raising the dark water into a white and foamy froth. Prior to the establishment of the light on this spit of rock attached to Gerrish Point, the waters here were particularly treacherous when you consider the volume of traffic in and out of the river. And even after the light was in place, the number of wrecks continued to mount.

While living in a lighthouse was sometimes as hard, it was also filled with moments of enjoyment, and even delight.  Justine Flint of The Plymouth Herald proclaimed in the story headline: “Whales-Back, One of The Most Picturesque Lighthouses On The Coast.”

From where Justine stood, she saw past the ferocity of the sea, cast aside the howling wind on the other side of the five-foot-thick granite walls, and saw the simple beauty of something as enjoyable as a pot of piping hot stew filled with a freshly made batch of dumplings.

Flint described them as an epicurean’s dream: “They have to be prepared by absolute rule, we were told, and there is a trick to making them that few people realize. Captain White seems to have the art of preparation down to a science, and we give you the recipe just as he told it to us. If you want dumplings as they’re eaten at Whaleback Light, follow these directions:” 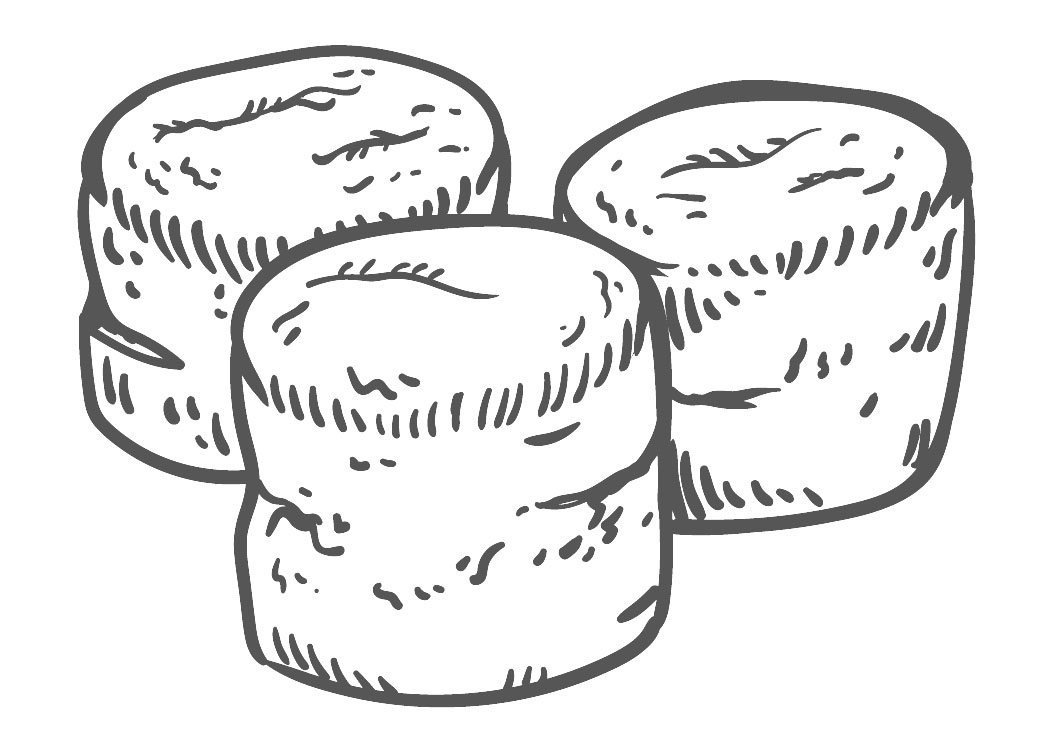 The Best Dumplings You Ever Had In Your Life

"Use two cups of flour, salt, then lard—but don't use too much lard, and work it in like biscuits. When you make dumplings, you want a little shortening and 1 ½ teaspoon baking powder. Now here's the trick to dumplings…Always put the dumplings (don't make them too large) into the stew, which should be boiling hard. The most important thing is to be certain that the stew is boiling when you put them in. After all, the steam is what is going to cook them. Keep boiling for 13 minutes. Then they are done. And if I do say so myself, said Captain White, they're the best dumpling you ever had in your life."